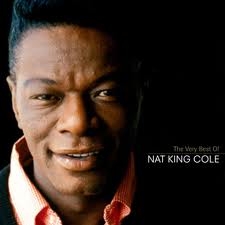 You would think everything lives on in the Internet, but the newspaper columns my dad wrote about a dozen years ago seem to have disappeared.

Witnessing Nat Cole's greatest hit
A recent brochure on the Ashland Cabaret Theater's upcoming musical, "King of Cool, the Life and Music of Nat King Cole" brought back memories of my encounter with the great singer 50 years ago.

As a teenager, I had dreamed that I would someday become an expert on the music of the swing era's big bands and the signers who appeared would them. I would then use this knowledge as a disc jockey in a big market or to write about the music scene for a magazine like "Downbeat."

I started collecting facts and anecdotes about people in the music business in 1942 and returned to the field when I came back from the war.

In 1950, before Nora and I married, I spent my vacation in Hollywood, interviewing people in the record business for source material. By then, the industry had turned to huge tape recorders for making record masters. Home-type tape recorders were still rather rare, but I rented one from a record store and lugged it over to Capital headquarters. There I recorded interviews with several singers and with Dave Dexter, a vice-president of the firm.

Dexter offered to get me into a recording session the next morning. The star, he said, would be Nat King Cole. Nat was 32 years of age then, a wonderful jazz pianist who did not consider himself a great singer, but he was.

The session was recorded on the morning of March 11, 1950. The studio had a large stage and bleacher seating for about 50 people. I was the only audience. On the stage was the Lex Baxter Orchestra and Chorus, a total of about 30 people.

In the middle of the stage was something that looked like a telephone booth made mostly of glass. Cole stepped inside and put on a pair of earphones. Having him in isolation allowed the engineers to record his voice on one tape, the orchestra on a second machine, and the chorus on a third. The final "marrying" of the tapes would be done days or week later with the producer, the arranger and the orchestra leader calling the shots.

The third song I heard that morning was almost not recorded. I learned from Dave dexter that Nelson Riddle, the arranger for the session, had pushed for the song, but Nat thought that the lyrics about a painting by Leonardo da Vinci were too esoteric for his fans, but he finally gave in. The song was "Mona Lisa." It became Nat King Cole's greatest hit ever, even bigger than "Unforgettable," which came later. "Mona Lisa" remained at the top of the charts for months and that one song helped make him a millionaire.

Through popular with fans, Nat King Cole faced discrimination throughout his life. He was the first black performer to have his own television show. It ran for two seasons in the 1950s, but NBC was unable to find one advertiser willing to sponsor a black singer.

By the mid-1950s, big bands were disbanding everywhere. Small groups had long been recording under the category of "Rhythm and Blues" or "race records," but those designations were rnamed "Rock and Roll" by the music business after Elvis Preseley appeared out of nowhere. He didn't coin the name, but he rode the tide of change.

With the disappearance of big band, my hundreds of pages of material not he music scene were suddenly outdated. By 1960, even Nat Cole's records were not tracking up sales as big as they had before. He died Feb. 16, 1966, of lung cancer, a victim of his two-packs-or-more-a-day habit. His death came exactly a month short of his 50th birthday. Yet the tremendous sales a couple of years ago of the CD "Unforgettable" by Nat's daughter, Natalie, revived interest in the man.

Through the wizardry of the control room, and thanks to the recording method of making four or more tracks of a song, Nat King Cole and his daughter sang a duet of the title song.

He would have loved it.