"Going Down the Steps with a Gun in his Hands" 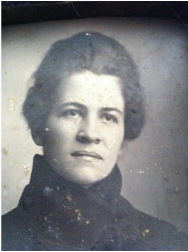 My grandmother didn’t marry until she was 32, in 1920. I just figured she was a late bloomer.

One weekend, when I should have been working on my editor’s revision letter, I goofed off by Googling my grandmother’s name. “Effie Satterwhite.” Google has obviously been scanning more books since the last time I looked, including one published in 1907 that listed the opinions of the Arkansas Supreme Court.

One of which involved Effie. When Effie was 18, her father shot her boyfriend for kissing her.

I’ve got booklets of family history and this is mentioned NOWHERE. My mom didn’t know it. She was sure my dad, who died in 2003, didn’t know.

According to the court records, when she was 17, Effie started seeing a man named Jim Wallis. One night they went to an “entertainment,” and returned at 11 pm. The court transcript states, “She started to go in the house, but was stopped by Wallis who reached out his hand and drew her to him and kissed her. She put her hands against him and pushed him away. They walked to the end of the porch, and stood there talking until the clock struck eleven. Wallis looked at his watch and then turned and kissed her again. He then left the house.”

Effie went inside, heard a door open, and then saw her father “going down the steps with a gun in his hands.” She heard the shot, and tried to run to Jim. Her father grabbed her, and said it was all her fault for hugging and kissing Jim. Finally he let Effie go to her boyfriend, who lay bleeding in the street.

Jim told her that he was sure he was dying. A neighbor carried him into a nearby house. Jim’s father came and said he should have known something like this would happen.

At the trial, Effie’s brother testified that a year earlier he had seen Effie and Jim together “in a very suspicious attitude, conducting themselves in what he thought a very unbecoming manner on the front porch.” He ordered Effie inside, and told Jim to never come back. But Jim did, the next day, and told Effie’s brother that he loved her.

They continued to see each other until the night he was gunned down. My great-grandfather’s defense was that he was sure Jim “was trying to seduce his daughter and relieve her of her virtue.” But the jury found that the two intended to marry.

My great-grandfather was convicted of assault with intent to kill, and his appeal was denied. Jim died in a hospital four months after the shooting.

And my grandmother did not marry for 14 more years.

- Did Effie feel it was her fault for kissing and touching Jim?
- Her fault that her father spent two years in prison?
- Did she regret not having sex with Jim?
- Or had she?
- Did they let Effie visit Jim in the hospital where he lingered until he died?
- Did everyone in town know, and whisper about her? Was she branded a loose woman?
- How did the murder affect her relationship with her father?

My grandfather had pernicious anemia, was possibly mentally ill, and definitely wasn’t a prime catch. They were 36 and 43 when my dad was born.

She was 72 when I was born, and 90 when she died. She was slender, with a sharp mind and sharp opinions. She was prim, severe, judgmental, fanatically religious. She could whistle really well.

Our written family history has stories my great-grandfather shooting a puma and catching horse thieves. Nothing about him murdering his youngest child’s beau. One of the last coherent conversations I had with my dad was about his grandfather.

The man who murdered his own daughter’s boyfriend.