The Girl Who Was Supposed To Die 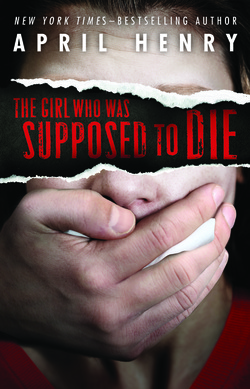 About the book
“Take her out back and finish her off.”

And that she must run.

This nail-biting thriller involves murder, identity theft, and biological warfare. Follow Cady and Ty (her accidental savior turned companion), as they race against the clock to stay alive.

Awards and honors
Reviews
"If you liked Girl, Stolen (2010), you’ll love Henry’s latest tale of abduction, escape, and paranoia. Cady, 16, wakes up on the floor of a cabin. Two of her fingernails have been yanked out. A man says, “Take her out back and finish her off.” Worst of all, she has total amnesia. To her shock, she discovers that she knows how to fight—she beats up her captor and flees, and what follows is 28 hours of outfoxing an unknown enemy who wants her, and apparently her family, dead. Cady’s accomplice is Ty, a McDonald’s cashier who risks his own skin to help her to safety. If it sounds convenient, don’t worry—Henry gives Ty a backstory that makes his behavior believable, and there isn’t an out-of-place romance to gum up the breakneck pace. Cady’s bewildered first-person voice gives the book a tumbling, breathless feel as we scrape for clues right along with our protagonist. For most of the book, readers won’t know if Cady’s sane or not, which gives this hurtling thriller a welcome, darker edge. HIGH-DEMAND BACKSTORY: Henry is a dependable best-selling force in both adult and YA worlds, and this book is tailor-made to please her fan base."
-  Daniel Kraus, Booklist

"The possibility of biological warfare amps up the suspense, while short chapters and Cady’s direct, first-person narration make the Hollywood-blockbuster–like story pulsate. ... An adrenaline rush for reluctant readers."
- Kirkus

"April Henry has it down with her taut mysteries, and The Girl Who Was Supposed to Die is as good as her other works. Suspense and tension build from the first page—in which men are taking Cady out to kill her—to the last, as she uncovers the secrets in this eco-thriller."
- School Library Journal

""Take a deep intake of air before opening The Girl Who Was Supposed to Die."
- Seattle Times

"Henry’s novel is dynamic and vivid, the sort of story that would easily make the translation from page to screen. She scatters enough red herrings to throw off even veteran mystery fans, and ramps up the stakes when her protagonist is faced with a terrifying deadline."
- Denver Post

"You can’t put it down. April Henry really knows how to keep readers going and get them excited about what they’re reading."
- Oregon Public Broadcasting

"In the tradition of Lois Duncan, author of “I Know What You Did Last Summer,” and Caroline Cooney, author of “The Face on the Milk Carton,” Henry’s latest novel features a teenage girl whose life is turned inside out by bizarre circumstances. Teens looking for the best pulse-pounding suspense novel of the year can stop looking. It is this one: “The Girl Who Was Supposed to Die” by April Henry."
- Asheville Citizen Times

"Older Jack and Jill readers will find themselves unable to put down this book until they reach the stunning conclusion."
- Jack and Mill Magazine

"Henry has turned up the intensity several notches from her previous YA books with this edge-of-your-seat thriller. ... Readers will be racing to turn the pages without questioning details. ... A good adrenaline rush with the tiniest hint of romance."
- School Library Journal

Meet Brooke W., who chose The Girl Who Was Supposed to Die for her school project. She had to analyze the book, write a journal entry (which she did on a napkin which is what the character Cady did in McDonalds) and deliver a monolog while dressed as Cady, among many other things.
Inspiration
For the past few years, I’ve been writing books inspired by real events. I’ll hear something on the news and I’ll think - hm, what if...? That’s where Girl, Stolen and The Night She Disappeared came from. But The Girl Who Was Supposed to Die was actually inspired by the lyrics to a song called Scared at Night by Kathleen Edwards:

That's it boy, there is some things in life
You don't wanna do, but you know is right
So take him out back and finish him off
Got your gun off the shelf, it only took one shot

One day when I was running, I was listening to this on my iPod shuffle, and I thought, ooh - What if there was a girl?  And she wakes up on the floor of a ransacked cabin with two men standing over her. And one of them says, “Take her out back and finish her off.”

And the more I ran, the more I thought about it, and the more I knew she had been tortured and the two men were mad because she wouldn’t - couldn’t - tell them something they really wanted to know.

For years, I’ve been collecting stories of people who experience fugue state amnesia. In 1985, a Tacoma reporter disappeared. A lot of people thought she had been murdered in connection with a story. She turned up 12 years later in Sitka, Alaska, with no memory of her past life. In 2009, a school teacher disappeared for three weeks in Manhattan. When authorities went back and looked at security cam footage, they would see her going into a store, for example, and looking confused, and then eventually leaving.  When she was found,  she had no memory of who she was.

People suffering from fugue state cannot recall their past. They don’t lose their memory of how to function in the world - they just lose their personal memories. There’s a fascinating British documentary about a guy who walked into a hospital and said he had no idea who he was. In one amazing scene he goes to the beach. He’s standing on a rock next to the water and he says, “I don’t know if I know how to swim. I guess I’ll find out!” And then he jumps.

One thing people with fugue state seem to have in common is that have been under immense stress. One theory is that some brains, when subjected to a lot of stress, simply hit the reboot key. It’s a way for the person to run away from a bad situation.

And when my fictional girl wakes up in this trashed cabin she realizes someone has pulled out two of her fingernails. She figures that’s what caused her to lose her memory - but it’s actually something worse. Much worse.

So now I had an idea I loved, but there was a lot more work I had to do.

Say you were this girl waking up with no memory and two men are discussing killing you. What would you do next? Well, what I did was have my kajukenbo instructor drag me around the floor with his hands under my armpits and we figured out some ways the girl could fight back.

​Another thing I had to do was to figure out WHY the bad guys wanted to kill her. I had to figure out if she might possibly be crazy - and I definitely wanted her to look crazy.

And what were the answers? I used a mind-mapping program at bubbl.us to brainstorm. Where was her family? Were they dead? Being held captive? Had they fled to another country? And who was behind it? Was it the military? The government? And if it was the government, was it US or foreign? Was it a drug company? A chemical company?

I spent a lot of time researching bioweapons. It’s illegal to manufacture them - but it’s not illegal to research how to defend against one - which is a pretty big loop hole. I spent a lot of time stocking an imaginary lab, looking at online catalogs, debating the merits of special cages that can hold a thousand mice, figuring out how to grow a virus and make a vaccine. I spent so much time researching bioweapons it’s a wonder the FBI didn’t come knocking at my door. My fictional world was reviewed by a scientist who has a top-security clearance and has done bioweapons research. She said the idea was “very plausible - and evil.”