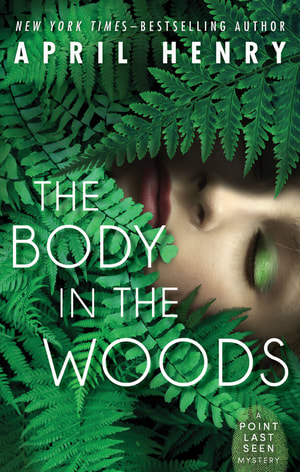 About the book
Alexis, Nick, and Ruby have very different backgrounds: Alexis has spent her life covering for her mom’s mental illness, Nick’s bravado hides his fear of not being good enough, and Ruby just wants to pursue her eccentric interests in a world that doesn’t understand her. When the three teens join Portland County Sheriff’s Search and Rescue, they are teamed up to search for a autistic man lost in the woods. What they find instead is a dead body. In a friendship that will be forged in danger, fear and courage, the three team up to find the girl’s killer—before he can strike one of their own.

Awards and honors
Reviews
A fast-moving and well-constructed mystery... Each teen comes from a unique and compellingly drawn background, expressed with impressive effectiveness given how quickly the plot moves. Nick, whose father died in the Iraq War, has joined SAR in hopes of both living up to his father’s legacy and impressing girls. Timid but capable Alexis pushes others away to stop them from discovering that she spends most of her time and energy managing her mother’s mental illness. Ruby in particular stands out. Her socially unacceptable but genuinely felt exuberance at participating in a murder investigation is frowned upon by parents and police but lovingly conveyed through enthusiastic dialogue and narrative asides. Short, obsessive chapters from the unidentified killer’s point of view add to the suspense, and enough clues are dropped as to the killer’s identity that astute readers will be able to solve the puzzle before the final, high-stakes climax. A quick, thrilling read that doesn’t skimp on characterization.
—Kirkus

Three Oregon high school students help the local police by volunteering with Portland Search and Rescue in this fast-paced kickoff to Henry’s Point Last Seen series. ... Henry (The Girl Who Was Supposed to Die) is well within her wheelhouse with this tense mystery, which can read a bit like a throwback to “teen detective” novels from decades past. The author’s expertise at plotting a murder mystery and knowledge of police procedure are evident.
—Publishers Weekly

"Henry realistically portrays these three kids thrust into a real-life horror. Their doubts and fears, as well as their strengths, all ring true and teens will be able to identify with one of the protagonists. The adult characters, especially Alexis’s mother, are also fully developed. [A] pervading sense of threat and danger is present throughout. Give this series opener to fans of character-driven mysteries."
—School Library Journal

"The fast-paced plot, mirroring familiar TV crime procedurals, makes this a good choice for reluctant readers.... High Demand Backstory: With books like Girl, Stolen (2010), Henry has become a leading light in YA mystery. Readers whipping through her other books will move smoothly on to this one."
—Booklist

"Henry has created not only a gripping mystery, but rich and detailed characters as well.  The story is told from multiple points of view, including the three teens’ and the killer’s.  The action starts right away, and does not stop until everything comes to a head at the end of the novel.  Henry does a great job of setting the scene, taking the reader on a journey to solve the mystery, and still successfully introducing intricate plot lines and situations.  This is a solid mystery that will appeal to reluctant readers."
—VOYA, 4Q 4P S

"Short chapters, quick pacing, an easy-to-follow mystery, and a smidge of real danger make this a likely choice for TV crime drama fans."
—Bulletin for the Center for Children's Books

"April Henry has an excellent touch with young adult suspense. This is the first in her Point Last Seen series. Fans will be eager to see the next installment on the shelves."
—Salem Statesman Journal

"In the first in a thrilling new young adult mystery series from best-selling author April Henry, three teens join Portland’s Search and Rescue (SAR) team for very different reasons. For Nick, who lost his father in the Iraq War, volunteering with SAR represents true courage and leadership. For Alexis, SAR means overcoming a broken home and standing out on college applications. But for awkward and lonely Ruby, SAR is everything. When the three teens are called in to find a lost autistic man, they find a dead girl instead. Ruby fears Portland has a serial killer targeting homeless girls, but the lead detective doesn’t believe her. Ruby, Nick and Alexis investigate the murder on their own—but the killer soon turns his attention to them. Filled with facts about real crime scene investigations and search and rescue teams led by highly trained teenagers, this engaging new series will appeal to “CSI” fans and mystery readers alike.
—BookPage

"The pacing of the book is classic detective murder fare. As an introduction to the genre, THE BODY IN THE WOODS is valuable for capturing the feel of the murder mystery, the red herrings and the slow reveal of clues, all the while keeping to the maxim of never concealing the evidence from the reader.... The action is intense and the story builds to a satisfying and dangerous climax, with moments for each member of the team to shine. For fans of the genre or first-time sleuths, THE BODY IN THE WOODS is a fun yet suspenseful read that seems well worth the price of admission. The characters feel their age, and their voices are interesting and fresh. Additionally, the search and rescue angle makes sense and is original enough to help the book stand out from other mysteries and series, enough that I can recommend it without reservation."
—TeenReads.com 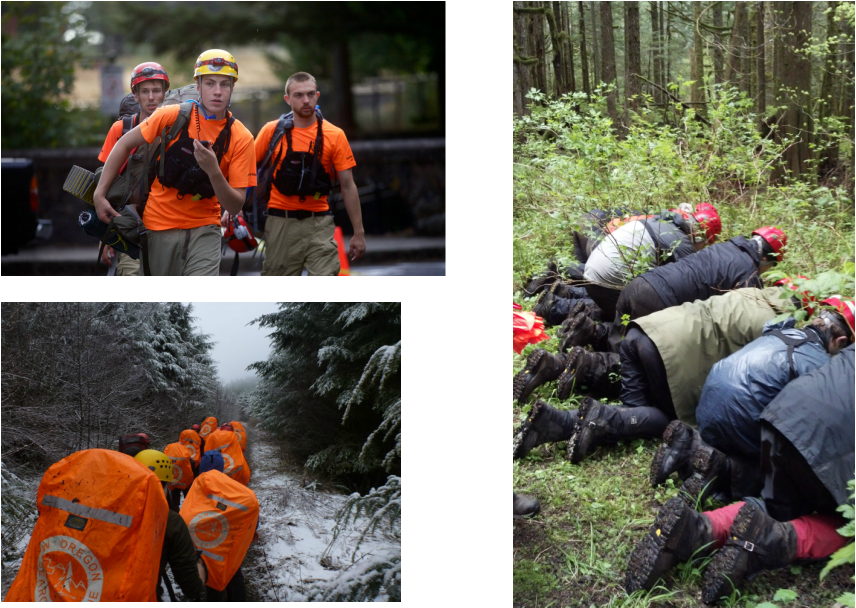 Inspiration
I got the idea in April 2012 when a friend told us her teen was a volunteer with Multnomah County Sheriff's Office Search and Rescue. Not only does MCSOSAR look for people lost in the woods, but they also recover bodies and they do crime scene evidence searches and they are a teen-led organization.  The more I learned, the more I was sure I had found what I had long sought: a realistic hook for a teen mystery series. People in MCSO SAR have been so helpful to me in researching and writing.

The teens who volunteer for it undergo an incredible amount of training. They meet every Wednesday evening as well as do weekend outings once a month. I have gone to trainings with them, most recently a unit on "man tracking," which is what they call it when you follow someone's tracks. It's a real art, and the only clue that someone might have been there can be as small as a broken twig or a few grains of sand on top of a leaf.  (I told folks at my kung fu school that I was learning to man track and another lady said, "Oh, don't worry, honey, I can set you up with somebody!")

And here's a teaser for the second book: Nick, Alexis and McClure are well on their way to being full-fledged members of Portland’s Search and Rescue - and to being friends. When a woman is found stabbed to death, their team is called out to search for evidence. Suspicion begins to fall on the woman’s neighbor, an awkward kid who collects knives, loves first-person shooter video games, and doodles violent scenes in his school notebooks: Nick Walker. As the evidence against their friend mounts, Alexis and Ruby must decide where their loyalties lie - even if it puts them in danger. 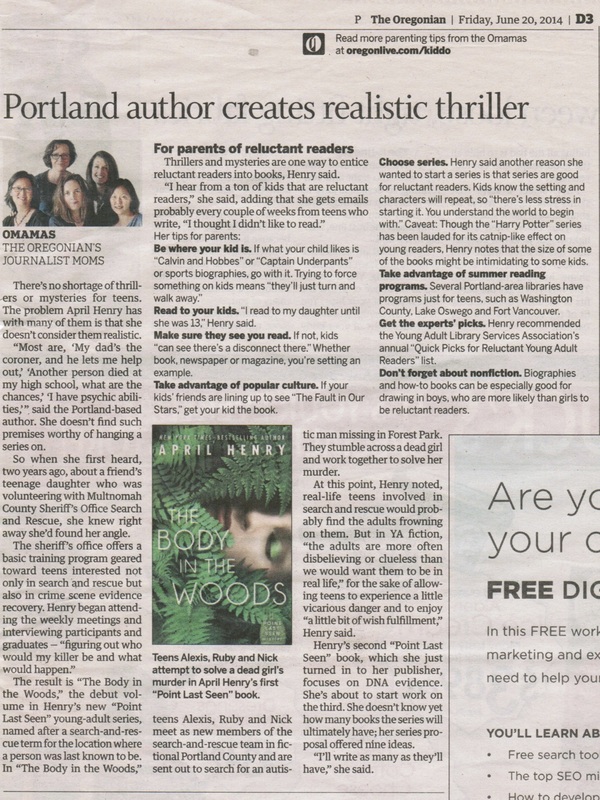 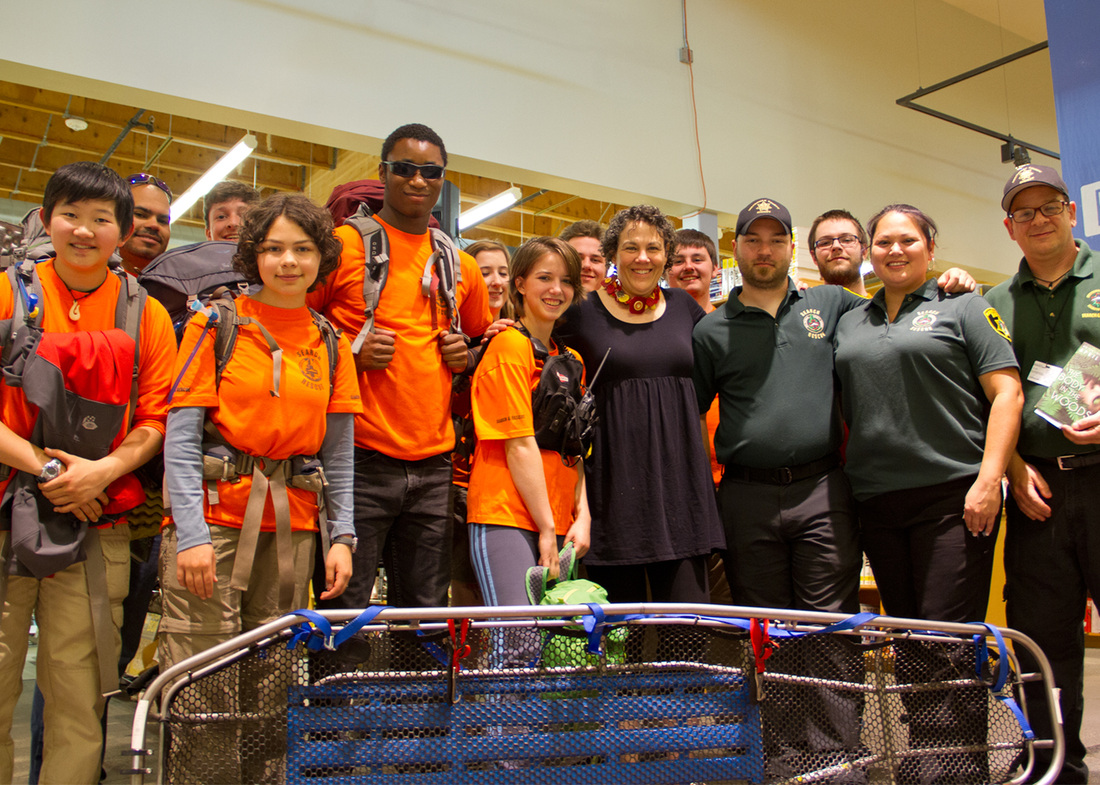 April and members of the real search and rescue team that inspired her new series at the kickoff event at Powells Books.