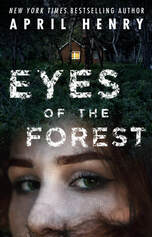 About the book
After a bestselling fantasy writer disappears, only his biggest fan believes he’s in danger. Instead of re-reading his books, she must venture into the real world to uncover the truth.

Bridget found refuge in RM Haldon's epic fantasy series, Swords and Shadows, as her mom, another fan, was losing her battle with cancer. Bridget cared about the series first, not the author. But when she met Haldon at one of his rare book signings, she impressed him with her encyclopedic knowledge of the fantasy world he created. She has been working for him ever since, as he attempts to write the final book in his blockbuster sword-and-sorcery series. Now he has gone missing, and Bridget is the only person who feels concerned. Can she piece together Haldon’s cryptic clues and save him before it’s too late?

Honors
Named to the Tome Society "It List" for young adult literature.
Finalist for the Oregon Book Award


​
Reviews
"Eyes of the Forest by April Henry (The Lonely Dead) is a suspenseful, captivating look at what may happen when a fantasy world becomes too real for some of its fans.
"When 10-year-old Bridget's mom was dying of cancer, Bridget spent hours reading aloud from R.M. Haldon's Swords and Shadows series to ease the pain for them both. At 12, red-headed and "milk-pale" Bridget impressed the fantasy writer at a signing with her "encyclopedic knowledge" of his books and was hired to keep track of the myriad details for him. Now 17, Bridget still works for him, using her own database to keep everything straight. But Bob Haldon has writer's block and, despite clamor from readers, the series finale isn't forthcoming. Then Derrick, a LARPer and Haldon's "biggest fan," meets his idol, whom he finds drunk and despondent. Derrick and Bob hatch a plan to get the author writing again but things go "horribly wrong," and Bob ends up "in an isolated cabin, injured, shackled. No one but his captors [knowing] where he [is]." Bridget becomes increasingly worried and, since no one takes her fears seriously, begins an investigation of her own.
"Henry's engaging and often thrilling narrative is told from multiple points of view, allowing readers close access to the motivations of all her main characters. She expertly examines the darker side of the culture of fandom, including pressures it puts on creators, and how fans themselves get out of hand. Ultimately, it's Bridget who, though completely submerged in the world of Swords and Shadows, manages to save the day by acting IRL. --Lynn Becker, reviewer, blogger, and children's book author

"Discover: Seventeen-year-old Bridget must leave fantasy behind when her favorite author is kidnapped by an overzealous fan in this suspenseful story."
–BookPage
​
"When the police do not believe that Portland, Oregon, author R.M. Haldon has been kidnapped, it’s up to his young researcher, Bridget Shepherd, to save him.
"Famous fantasy author Haldon, who bears similarities to George R.R. Martin, has been trying to finish the much-anticipated final book in his Swords and Shadows series. What happens when he wakes up trapped in a cabin, chained to a treadmill desk, with some food and water and a note ordering him to write? Communicating via coded messages, he can only hope that Bridget, the 17-year-old high school student who helps him with research, will realize something is wrong. Bridget came into his life at a reading during which she demonstrated her encyclopedic knowledge of his world. Her attachment to the Swords and Shadows books stems from reading them with her mother during the painful years before she died of cancer. Afterward, lonely Bridget had few friends left, and her workaholic father was frequently absent. Now the books allow her to open up to classmate Ajay as she shares with him the fantasy world she loves—but, like the police, Ajay doubts her theory, and Bridget must act alone. The excellent pacing, shifting between the perspectives of the main characters, adds to the suspenseful feeling of a ticking clock, and readers come to understand everyone’s motivations. Apart from Indian American Ajay, main characters are White.
​"Offers a suspenseful and dastardly plot entwined with fan culture and mystery. (Thriller. 12-18)"
—Kirkus

"In this mystery with a clever twist by Henry (Playing with Fire), a George R.R. Martin–esque author is forced to write in captivity, his only hope of rescue lying with his teenage Portland, Ore.–based assistant. Alternating perspectives, including that of middle-aged Swords and Shadows author R.M. Haldon, or Bob, whose yearslong tardiness on the final book in his epic fantasy series turned TV show has angered many fans; redheaded Bridget Shepherd, 17, who secretly works as Haldon’s “continuity supervisor”; and teenage kidnapper Derrick, a “socially inept, geeky pariah,” all white, plus Bridget’s Indian American classmate and love interest Ajay Kapoor, allow readers to delve into the central players’ psyches, presenting a portrait of each individually and in pairs before their combined narratives overlap. The conceit—that a fan might kidnap and exploit an author to coerce them into continuing a story—feels plausible in Henry’s treatment of a simulation gone wrong. Details such as the framing of Haldon’s weight loss during confinement and a lingering focus on Ajay lessen the overall effect of this thriller, but its brisk pacing and sensational premise will have wide appeal."
—Publishers Weekly

​"Henry immerses readers deep into obsessive fandom in this fast-paced thriller. Seventeen-year-old Bridget, described as having "milk-pale skin and russet colored hair," is a huge fan of RM Haldon's epic fantasy series "Swords and Shadows." She knows the entire series backward and forward and can remember the smallest details, from the complicated relationships between characters to how many times specific items have been mentioned or used in the series. When Haldon goes missing, Bridget and her companion Ajay, who is Indian American, explore the dark side of fantasy world enthusiasts. The book uncovers the ins and outs of LARPing (live action role-playing). Tension mounts as Henry's short chapters, which alternate focus between characters, add suspense and plunge readers into the darker side of fandom. Mentioning some of today's popular social media sites and the harm of the dark web makes it more realistic, all the while still maintaining a Misery-type vibe for today's readers. VERDICT An edgy, quick read for folks who love fantasy novels and authors"
—Kharissa Kenner, Bank Street School for Children, New York City, School Library Journal