Heart of Ice (3rd in the Triple Threat Series) 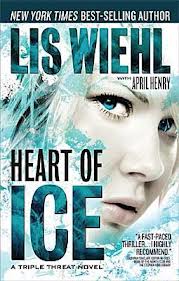 About the book
Elizabeth Avery could easily be the girl next door.

But what she has planned will make your blood run cold.At first glance, the crimes appear random. Arson. Theft. Fraud. Murder. But these are more than random crimes. They're moves in an increasingly deadly game. And the one element they have in common is a woman who is gorgeous, clever…and lethal.

Elizabeth Avery has a winsome smile and flawless figure, but underneath is a heart of ice. She's a master at manipulating people, convincing strangers to do the unthinkable. And she orchestrates it all without getting too close. Until now.

After an inquisitive young reporter is ruthlessly disposed of, the crime catches the attention of Federal Prosecutor Allison Pierce, FBI Special Agent Nicole Hedges, and crime reporter Cassidy Shaw. They know they're dealing with a cold-blooded murderer who could strike at any time. What they don't know is that they're already on a first-name basis with the killer.

And one of them may be next on her list.

Because Elizabeth has no intention of getting caught — not when she's having this much fun. She learned a long time ago that the safest place to hide is in plain sight… and the greatest way to defeat those weaker than her is to make it personal.

Reviews
"Wiehl and Henry continue weaving additional well-crafted story lines throughout the book and this is what makes their third series novel a real page turner."
- Suspense Magazine

"This fast-paced story will keep readers on edge - as they know who the killer is and wonder if the good folks will figure it out in time to save themselves."
- The Oklahoman

"Wiehl and Henry have a knack for creating villains you wouldn't want to run across in your daily life. Even though the identity of the murderer is known early on, the motivation and methods aren't revealed until the heart-pounding ending. This novel is an exciting addition to the Triple Threat Club series."
- Romantic Times