My Mom and the Round Rock

I found this round rock while I was running.

When I was a toddler, my folks were having a difficult time. My dad was working at an all-news radio station that was going down the tubes (and would soon become an all-rock-and-roll station). My dad had chased jobs across four states, and they were so broke they couldn't even afford a stroller.

My grandmother came to visit and later went for a walk. She bounded back into the house, calling, "Nora, guess what?" She was so excited that my mom thought she must have figured out some way to solve their problems. Instead, she handed my mom a rock, exclaiming in amazement over how round it was.

After she left, my mom laughed until she cried (or maybe it was cried until she laughed). She carried that rock in her purse for years, and there were times there was no money in the purse, just the rock. But she always said, if all else failed, she had a round rock.

In my family, it's an honor to go through hard times and earn your round rock. So if you're in need of a round rock today, think of this one as yours. 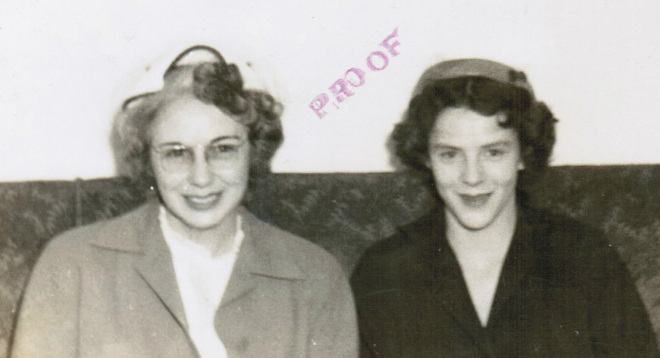 Grandma Dorothy and my mom. My family has a long tradition of being thrifty/poor, so photographs stamped with the word "Proof" abound.