Roald Dahl Made Me a Writer 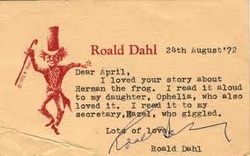 Writers need an audience. It's not enough to create the story. Without a reader, does it really exist? When I was a kid, Roald Dahl not only wrote the stories I read - he read a story I wrote.

I grew up in a small logging town in Southern Oregon, where there was little to do if you didn't like to hunt and fish. I practically lived at the Carnegie-funded library. In grade school, I started to write my own stories.

One was about a six-foot-tall frog named Herman who loved peanut butter. I decided it would appeal to Roald Dahl, the author of my beloved Charlie and The Chocolate Factory. My father had told me that you could write to authors care of their publishers. So I sent off my story - carefully printed in pencil on wide-ruled paper - to the address printed just inside the front cover.

And eventually it found its way to Dahl in England. He sent me back a postcard. It's dated 24th August '72, and says, "Dear April, I loved your story about Herman the frog. I read it aloud to my daughter, Ophelia, who also loved it. I read it to my secretary, Hazel, who giggled. Lots of love, Roald Dahl."

Somehow I've managed to hold onto this postcard for nearly 50 years. It's amazing that he committed this act of kindness for one of what must surely have been a flood of scribbled missives.

Dahl even took the story with him to lunch and shared  it with his editor. She was also the editor of the Puffin Post, a British children's magazine. She contacted me and asked to publish it. But even before the magazine came out, I already knew that I was a real writer. Because Roald Dahl had told me so.

The real-life inspiration for Charlie and the Chocolate Factory

In his autobiography Boy: Tales of Childhood, Dahl talks about how the school he attended,  Repton School in Derbyshire, was close to a local Cadbury factory. Cadbury representatives would bring a dozen chocolate bars  with new flavors and filling to the school for Dahl and his teenage friends to sample and rate. Cadbury was also in fierce competition with another confectioner, Rowntree's, and the two companies frequently engaged in corporate espionage to get an edge on the other. Dahl was fascinated by the cutthroat atmosphere in an industry devoted to making sweets for children, and it helped inspire Charlie and the Chocolate Factory.