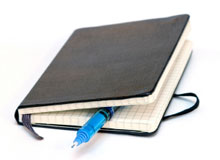 Arrive at Portland airport two hours early because am so excited to begin my tour for my new mystery, Square in the Face. Discover bad weather has delayed flights into SF. Pass time by going to Powells. Clerk says paperback of Circles of Confusion has been selling well—so well, in fact, they have none in stock. They do have three hardbacks of Square, so sign them.Arrive three hours late at my hotel. Call escort Harper Collins has provided me. Originally plan was to do "drive-by signings" at as many stores as possible. She says she will be there in 20 minutes. Manage to shower, change clothes, take off clothes just put on, iron them, change back into them, and apply lipstick. No time for lunch.Have heard escorts often have a basket in their car with snacks, water, napkins, etc.—and this one is no exception. Drink one water and inhale a bag of Lays potato chips. Escort, who doubles as a flight attendant for TWA, drives with one side of car located directly over stutter strip marking lane. Decide not to comment.Go to Book Passage, a big independent similar to Powell's, in Corte Madera. Sign stock, meet several clerks and owner—who picks up a copy of Circles for himself. Dinner is sandwich from bookstore, eaten in car over a plastic garbage bag spread over lap.Not many people turn up at M is for Mystery in San Mateo, but turns out parking garages are all closed for earthquake retrofitting. Owner has flown up to meet me. Conventional wisdom says a book tour is only partly about meeting readers. It's more important to impress bookstore personnel who will be there selling books long after you are gone.Back in dead quiet hotel room. Realize why so many authors drink on tour. Read Cold Day in Paradiseinstead.Plane to LA the next day is cancelled. Manage to get on another flight. See Circles in airport bookstore, and point it out to browser. He is so excited he buys one, has me autograph it, and then tells clerk in amazed tones that "the author" is in bookstore. On flight to LA, young woman next to me buckles battered teddy bear on top of her lap. She then reads Cosmo.Do drive-by signings in LA. Escort is guy who co-authored A Taste of Murder. He tells me that Jerrilyn Farmer has just signed a three-book contract, and that Barbara Saranella just got a rave review in theNY Times. Read in evening at The Mystery Annex in Venice. All amazingly muscular people on roller skates are gone from Venice at night, leaving only scary homeless people. Still a fairly good turnout. Afterward, owner recommends many authors, including Kate Ross, and talks about her untimely death from ovarian cancer.Next day, Gregg Main, author of Every Trace, drives me to three signings in LA. Only in LA could you drive for two hours and still be considered in same city. Gregg refuses money for gas, although he does accept a signed hardback. All three signings are well attended, although by last one can't remember what have told whom. Fly home and discover have lost three pounds. Decide to skip lunch all the time, until realize it was just not drinking water and have not really lost any weight.