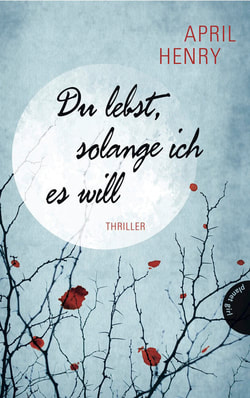 German edition. Title is: You Live as Long as I Allow It
Inspiration
The Night She Disappeared was inspired by a real-life case that happened nearly 30 years ago. A man ordered some pizzas to be delivered to what turned out to be a false address. He asked if "the girl in the orange Volkswagen" was working delivery that night and was told a different girl was. That girl's car was later found with the keys in the ignition and the pizzas and her hat on the ground. Her body was never found.

The parents hired a psychic, who zeroed in on a young man who owned a truck similar to one that had been seen in the vicinity. Right after that man talked to the psychic, he killed himself, never revealing where he had left the delivery girl's body. For years, the case was considered closed — until another man, already in prison, confessed to the murder. The man who committed suicide had nothing to do with it. I was always fascinated by this twist, and decided to write a book with a better outcome than the real story. I also wondered how it would feel to know that you were the girl the killer asked for first. In high school, I worked at Pietros Pizza, so I was able to draw on that experience for real-life details.

Read an interview about the book.