My pandemic hobby: making necklaces out of buttons the way my mom did 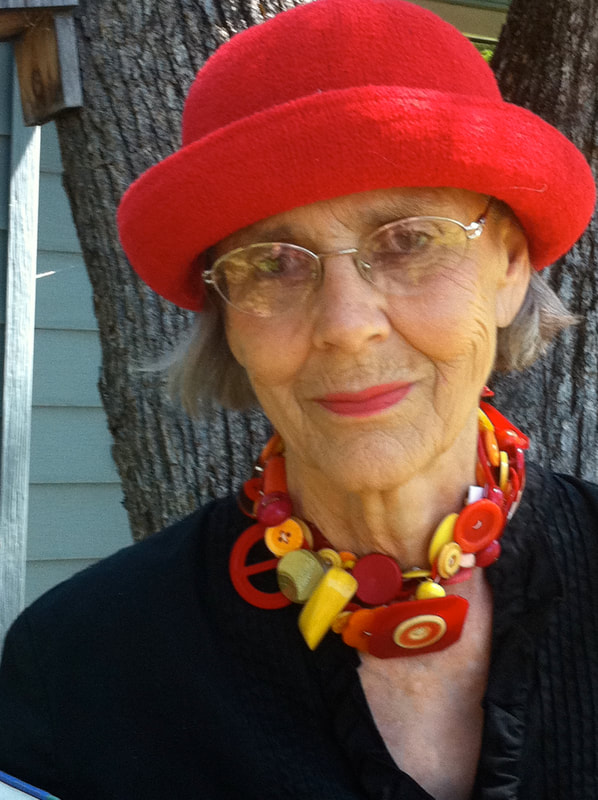 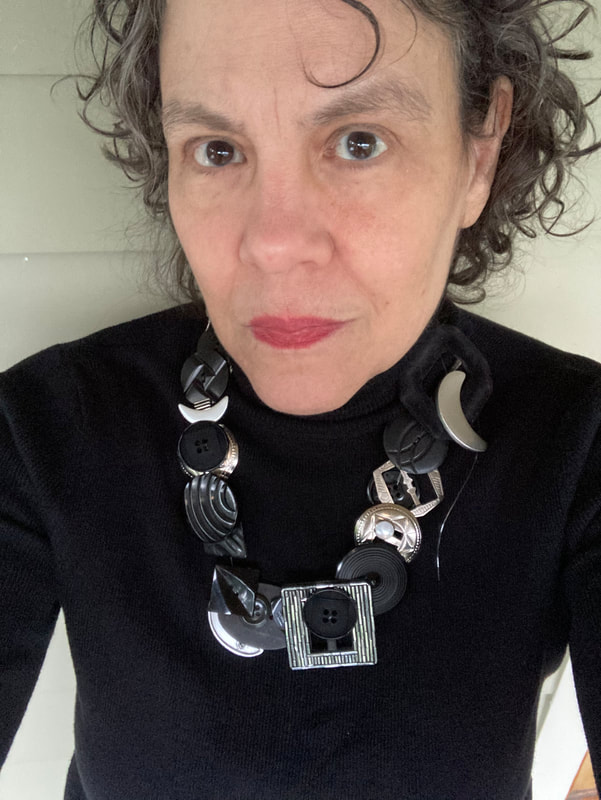 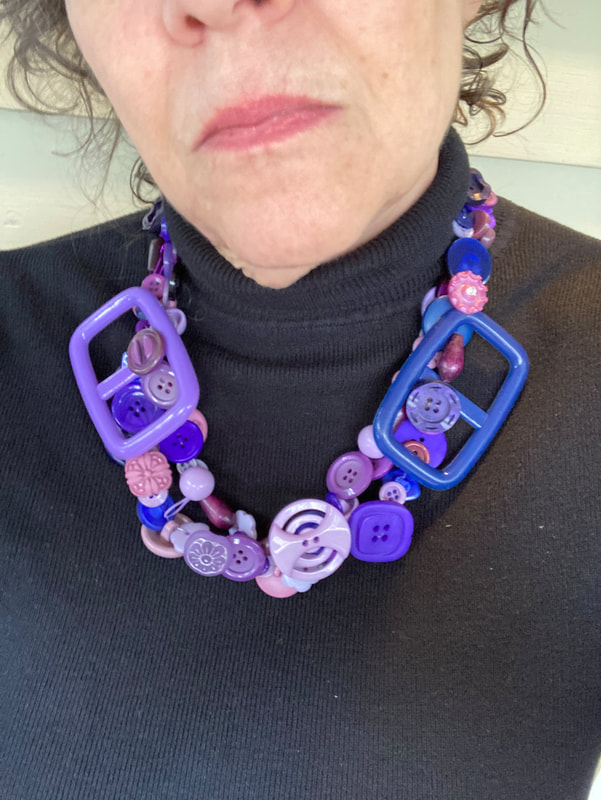 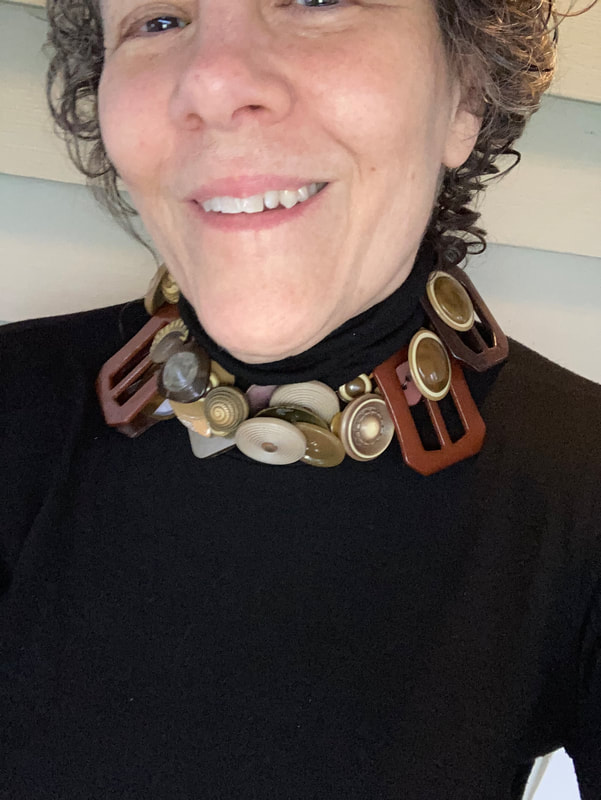 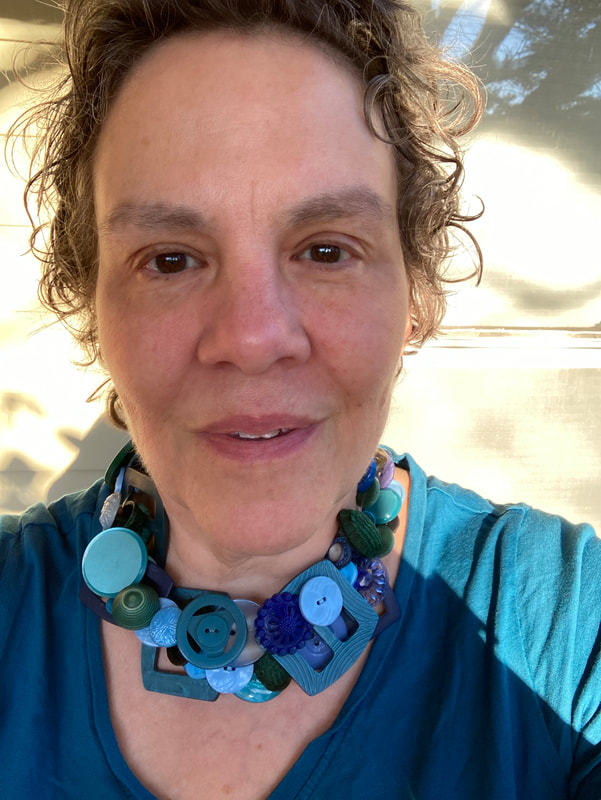 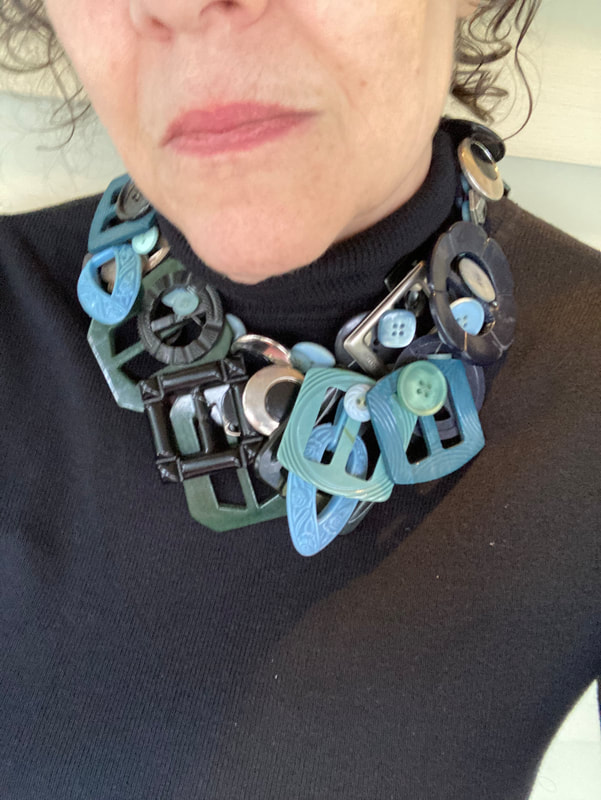 Short version:
April Henry is the New York Times-bestselling author of 27 mysteries and thrillers for teens and adults. She lives in Portland, Oregon, with her family.

Slightly longer version:
New York Times-bestselling author April Henry knows how to kill you in a two-dozen different ways. She makes up for a peaceful childhood in an intact home by killing off fictional characters. There was one detour on April's path to destruction:  when she was 12 she sent a short story about a six-foot tall frog who loved peanut butter to noted children's author Roald Dahl. He liked it so much he showed it to his editor, who asked if she could publish it in Puffin Post, an international children's magazine. By the time April was in her 30s, she had started writing about hit men, kidnappers, and drug dealers. She has published 27 mysteries and thrillers for teens and adults, with more to come. She is known for meticulously researching her novels to get the details right.

Long version:
I grew up poor in a small Oregon town. At the time, Medford, Oregon had about 16,000 residents and the economy was based on timber and pears. While my family didn't have much money, thanks to the local library, we were rich in books.

When I was 12, I sent Roald Dahl, the author of Charlie and the Chocolate Factory, a short story about a frog named Herman who loved peanut butter. The day he received it, Dahl had lunch with the editor of Puffin Post, an international children's magazine, and read her the story. She contacted me and asked to publish it. Click here to read more about that.

But as I got older, even though I read all the time, I didn't even dream of being a writer. It would have been like thinking I could fly by flapping my arms really, really hard. I put away my dreams, got a business degree from Oregon State University, and graduated into a terrible job market.

Eventually, I got a job in hospital admitting with lots of down time and started thinking maybe I could try to write a book about the life and death that surrounded me every day. I was finally pushed into trying to do something about it when I read a really bad book. I could, I figured, write a book that was at least better than that book.

Meanwhile, I kept working full time.  I worked as a writer for a number of health care organizations: the American Heart Association, HealthLink, and Kaiser Permanente. (The reality is that a writer who is just starting out will need another job.) That first book I wrote attracted no interest from agents. My second book got me an agent (and we're still together many years and many books later) and nice rejection letters from editors. My third book didn't even get nice rejection letters from editors. My fourth book, Circles of Confusion, sold in three days. It was like an eight-year overnight success.

I've written 27 mysteries and thrillers for teens and adults. Face of Betrayal, the first in the Triple Threat Club series, co-written with Lis Wiehl, was on the New York Times bestseller list for four weeks. It was followed by Hand of Fate, Heart of Ice and Eyes of Justice. We had a second series that begins with A Matter of Trust.

For many years, I worked full time while writing a book a year and being a mom. My life was a blur. At the beginning of 2008, I was lucky enough to be able to quit my day job.

My first young adult novel, Shock Point was an ALA Quick Pick, a Top 10 Books for Teens nominee, a New York Library's Books for the Teen Age book, named to the Texas Tayshas list, and a finalist for Philadelphia's Young Readers Choice Award. It was followed by more teen thrillers, including Torched and Girl, Stolen. In addition to being optioned for film, Girl, Stolen was an ALA Quick Pick, an ALA Best Books for Young Adults, a Barnes and Noble Top Teen Pick, and a winner or finalist for many state awards. It was even named one of the best books in Ireland in 2012. Its sequel, Count All Her Bones, The Night She Disappeared came out in 2012. It was a selection of the Junior Library Guild, a Top 10 Quick Pick, an International Reading Association Young Adults Choice, and optioned for film. The Girl Who Was Supposed to Die, was a YALSA Quick Pick, a  YALSA Teens Top 10 Finalist, an Oregon Spirit Honor Award winner, named to the Texas Tasha's list, on the International Reading Association's Young Adult Choice's list, and named to many state lists.  The cover was even named one of the creepiest covers of all time by the UK magazine The Short List. The Point Last Seen series, which was inspired by the real-life Multnomah County Sheriff's Office Search and Rescue team, and includes The Body in the Woods and Blood Will Tell, were chosen by the Junior Library Guild and named to several state lists. The Girl I Used to Be got a starred review from VOYA and was named to the Texas Lone Star list. It was also a finalist for the prestigious Edgar Award and won the Anthony Award. It was followed by a thriller with a paranormal Twist - The Lonely Dead - and a thriller inspired by terrorist attacks in Kenya and Paris - Run, Hide, Fight Back. The real-life Eagle Creek fire inspired Playing with Fire, and a lot of what I know about writing went into Eyes of the Forest.  Two Truths and a Lie was an Amazon Editor's Pick for Best YA.

I do a lot of research to get the details right in my novels. I know how to get out of duct tape, zip ties, rope, and handcuffs. I know how a blind character could use their cane to disarm a guy holding a gun. I know how to run in handcuffs, how to open a door with a credit card, how to pick locks, how to craft a disguise, how to get a stranger to give me a ride or let me borrow their cell phone, how to make fake IDs, how to steal a car, how to shoot a handgun and machine gun, how to photograph a crime scene, how to choke someone, how to search a building, and how to fight back if attacked in my car.

I am married and live in Portland, Oregon. We have one daughter. In my free time, I love Brazilian jiujitsu (I'm a blue belt), running, cooking, and of course, reading!

Look for more links about me and my life under the "Bio" header. 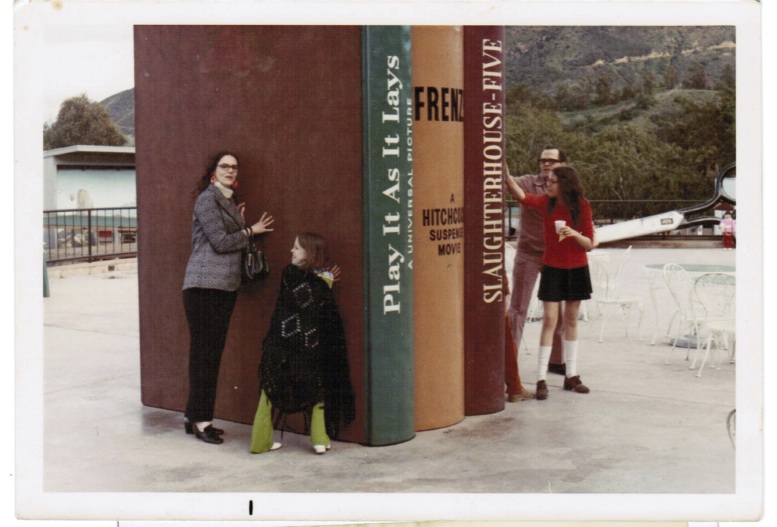 I was attracted to books from an early age. Dressed in our finest 1971 finery from left to right: Nora Henry, my sister Melody (note poncho and acid-green bell bottoms), my uncle, actor Lee Henry, and me (forgive the knee socks), at Universal Studios. On that same trip, we went to see my aunt, actress Jeanne Arnold, who was acting in a musical with Katharine Hepburn. We even got to meet her! But let's just say Hepburn did not necessarily want to meet a girl in knee socks from a small town in Oregon.