Face of Betrayal (1st in the Triple Threat Series)

About the book
Home on Christmas break, a seventeen-year-old Senate page takes her dog out for a walk and never returns. Reporter Cassidy Shaw is the first to break the story. The resulting media firestorm quickly ensnares Federal Prosecutor Allison Pierce and FBI Special Agent Nicole Hedges. The three friends, who have jokingly called themselves the Triple Threat Club, join forces to find the missing girl.

"Wiehl and Henry have penned a winner that seems to come straight from the headlines. Captivating suspense, coupled with tightly written prose, will entertain and intrigue."
- 4.5 stars, Romantic Times

"In the first exciting novel of the Triple Threat series, three female friends (an FBI agent, a reporter and a federal prosecutor) set out to solve the mystery of a missing Senate page.:
- OK! Magazine

"A compelling tale ... a well-written, gripping tale that reflects the authors' extensive knowledge of their subject matter."
- Deseret News

The inspiration behind Face of Betrayal
We certainly had no shortage of real life stories to work from there. The obvious one is Chandra Levy/Gary Condit, but there was also Monica Lewinsky/Bill Clinton, underage pages/Mark Foley, and 14-year-old babysitter/former Oregon governor Neil Goldschmidt. 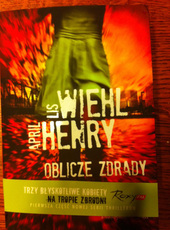 Polish edition of Face of Betrayal