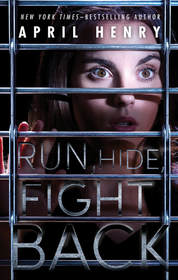 About the book
When a deadly shooting breaks out in a Portland shopping mall, a diverse group of six teens ends up trapped behind a store’s security shutter. To her own surprise, seventeen-year-old Miranda finds the others looking to her as their leader. But she’s hiding a big secret—and she’s not the only one. The group has only three choices—run, hide, or fight back. The wrong decision will have fatal consequences.

Reviews
"Bravery faces down hate in this diverse thriller set against a frighteningly believable mass shooting."
- Mindy McGinnis, Edgar-Award winning author of The Female of the Species and This Darkness Mine

The author brings to life modern-day teen concerns in this suspense-filled depiction of an active shooter situation. Through the perspectives of six main characters, the story touches on current issues for teens, including religion, drug use, immigration, cancer, guns, and families. Miranda, the main character, kicks off the story, shoplifting as the shooting at a Portland shopping mall begins. As the narrative evolves, so do the characters, and their relationships to one another. They set aside their differences as their common goal of survival brings them together. Well-done character development, even pacing, and the gripping premise will keep teens turning pages. VERDICT Purchase multiple copies of this timely thriller.
.—School Library Journal​

When a Portland, Oregon, mall is attacked by multiple armed shooters, six teenagers end up hiding behind a store’s security shutter, and 17-year old Miranda, addicted to Oxy, finds herself their unlikely leader. Henry’s vivid portrayal of the all-too-relevant issue of active shooters will have many readers riveted—and sadly doubles as relevant training for possible steps to take to survive a shooting incident. Although character development is somewhat limited, with members of the large cast being primarily defined by their ethnicity, religion, substance abuse, or other “issue,” the swift pacing and short chapters (which supply a minute-by-minute chronology) create a breathless, suspenseful read. As the disparate group of teens struggles to evade, escape, and subdue the killers, bonds are formed. It is both believable and heartwarming to see characters move beyond prejudice in order to aid one another. A map of the mall precedes the text, providing context for the very specific action. The title alone will grab readers, and the content feels chillingly real.
​—Booklist​

In true April Henry fashion, the reader will be on the edge of their seat waiting to see what will happen next. The coverage of many issues facing teens today also makes this story very relatable to teens.  Readers who enjoy Henry’s other suspense and mystery novels will not be disappointed in Run, Hide, Fight Back.
​—YALSA

​Inspiration
What if the high-stakes drama of Die Hard met the varied cast of Breakfast Club? That idea and real-life events like the 2013 attack on Kenya’s Westgate Shopping Mall were the inspiration behind Run, Hide, Fight Back. In it, six teens end up trapped in a shopping mall after a mass shooting.

In real life, such shootings often end quickly. Since Columbine, police have been trained to confront shooters as soon as possible. But I needed time for my fictional teens—which include a jock, an addict, a Muslim, a cancer patient, an undocumented immigrant and a teen from a military family—to decide whether to run, hide or fight back. Spoiler alert: they do all three.

Cops and other first responders helped me figure out how to make that time happen. I also spent three days at the Writers Police Academy, which is held at a real police academy, further researching my idea. And I took a class, led by a former SWAT member, on how to deal with an active shooter. I studied reports on what works and what doesn’t for civilians in those scenarios.

I also learned about Oxycontin addiction, and the head of security at a Target showed me the tricks shoplifters use. An emergency room physician helped me figure out how my characters could deal with a gunshot wound without a first aid kit.

​Back in the Eighties, my father, who was a county commissioner in Oregon, received death threats from a far right group called Posse Comitatus. That sparked my interest in anti-government domestic terrorists like Timothy McVeigh. I modeled my villains on them.