Got my blue belt in Brazilian jiu jitsu! 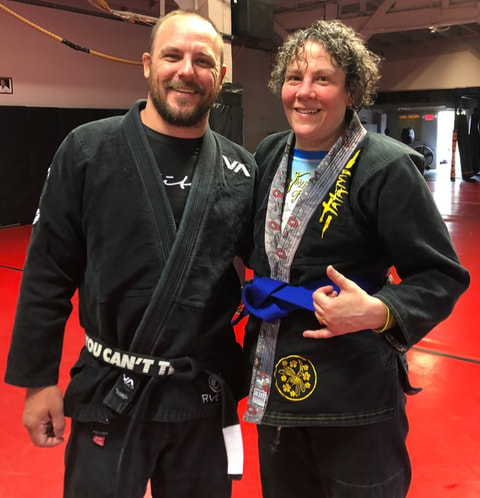 I got my blue belt in BJJ!

Getting this blue belt in Brazilian jiu jitsu (which is like wrestling + choking + joint locks) represents the hardest I have ever worked for anything. It was harder than finding an agent. Harder than getting published. Even harder than having a baby. It took me nearly five years. At this rate, I’ll be a black belt at 75.
​
Until I found martial arts (first kajukenbo, then kung fu, then BJJ), I have never liked any sport. in fact, the only reason I didn’t have a 4.0 GPA in high school was because of Cs in PE. BJJ turned out to be my true love, even though in many classes I’m the only lady on the mat, and I’m almost always the oldest. I do not have youth, athleticism, energy, flexibility or strength on my side. About all I’ve got is stubbornness and the occasional flash of “Hell no.”

Me and my BJJ friends

I've been wanting to take my purple best test in kung fu forever, but a series of unfortunate events (death in family, medical error that resulted in hospitalization, and knee injury from running) conspired me to be out of town or out of commission whenever there was a belt test.

Why I love martial arts

This isn't me, but a woman named Jaydra (the inspiration for Jaydra in Count All Her Bones.)  She's doing a drill called a monkey line, which teaches you to fight one attacker at a time.  I have even done monkey lines with all the attackers carrying knives (training knives) which is amazingly fun.