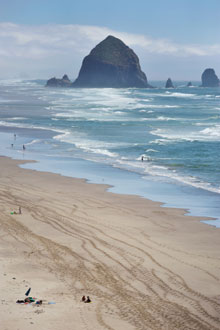 This article originally appeared in the Mystery Reader's Journal in 2001.

I live in Oregon and set my mysteries and thrillers here. Why would I need to go any place else? Just like the film makers who have turned Toronto into whatever city in the world they need, Oregon has enough variety for a thousand writers.

If your main character needs to stumble across a body washed up on the beach, Oregon has 400 miles of coastline—and all of it public property. How about a dramatic earthquake, perhaps one strong enough to crack open an old wall and reveal a long-buried secret? No need to go to California—Oregon has experienced several earthquakes in the last decade, and seismologists say it's only a matter of time before a really big one hits. The earthquake that hit Seattle also shook up Portland. I remember the vivid and seemingly impossible sensation of the floor rippling under my feet while I watched through the eighth floor windows as the construction workers grabbed onto the reinforcing bars in the building being erected next door.

You want deserts? Oregon's got ‘em. Caves? Ditto. Mountains perfect for concealing shallow graves, lonely forests where no one will hear your poor character scream, even freak windstorms strong enough to flip semis on their sides. In my first book, Circles of Confusion, the climax takes place after a bad storm has knocked out electrical and telephone service all over the city. The storm was modeled after a real 1995 windstorm during which Portland's mayor urged all non-essential personnel to return home before the winds hit. I work in health care PR and stayed to answer calls from the media about injuries. I drove home that night through a deserted, darkened city, winding my way through tree branches, cardboard boxes, patio furniture and even a camper shell that had been blown clean off a pickup. My car was the only one on the road. It was only natural that something of what I had just experienced made its way into what I was writing.

Oregon even has freak smoke or dust storms. Thirteen years ago, one of the former killed the daughter, son-in-law and three grandchildren of author William Wharton when the decades-old practice of burning grass-seed fields got out of hand, sending smoke across the freeway and causing a deadly pile-up. Two years ago, a farmer was plowing his wheat fields in dry Eastern Oregon when a sudden wind blew up, causing blinding dirt to envelope a freeway. Surviving victims described it as suddenly driving into a “brown fog.” From these horrific accidents, the seed of a story was born. What if a young woman was involved in a multi-car pileup caused by a dust storm, and the hitchhiker she had picked up was killed? What if a fire left the hitchhiker's body badly burned, so badly that it was misidentified as the driver's? And what if as a result of this same tangled 57-car pileup, this same young woman ended up with someone else's bag—a bag that contained $740,000? The answers to these what-ifs formed the basis for my new book, Learning to Fly, which will be out in May 2002.

Besides its physical attributes, Oregon offers everything from big cities (well, all right, one big city) to tiny towns that aren't much more than a gas station and a single house. And the state also comes with a number of built-in topics. Oregon is the only state with assisted suicide, and while there are a great number of checks and balances to make sure only those who really want to and are really dying check out, I'm sure there's a plot in there someplace. How about a kooky cult? The Rajneeshees took over an entire region in the Eighties, and even unleashed bio-terrorism before the word was on everyone's lips, poisoning nearly a thousand people through a deliberately contaminated salad bar. And then there are the mushroom pickers, a nouveau Wild West mix of Russian and Cambodian immigrants and dirt-poor native Oregonians, all on the hunt for the patch of chanterelles, morels, or chicken-of-the-woods that will earn them enough in a few weeks to live on for a year. That is, if someone with a gun doesn't scare them off—or worse—first.

Hmm, sounds like a good premise for a story. Better go make some notes.