Stealing from Myself to Create a Character 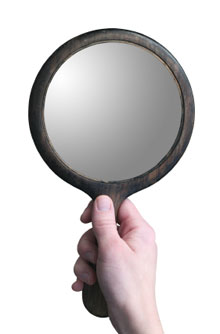 Written for Amazon in January 2001

When I created the character of Claire Montrose in my first mystery novel, Circles of Confusion, I didn't realize that through her I would explore my own insecurities.

I did know that I didn't want to create a perfect person who knew French and jujitsu, who could hack into a computer with one hand tied behind her back, and who not only knew what Manolo Blahnik shoes were and why they were important, but who also owned two dozen pairs.

Instead, I wanted to write about a real person. Someone who's smart but who never went to college. Someone who knows only a little about everything, feeling like they are always trying to catch up. Someone who likes junk food and has to work hard to not gain weight. Claire doesn't believe you should always think before you act, and thus she runs the risk of looking foolish—or of getting herself into deeper trouble.

In Square in the Face, the second book in the series, Claire has to face up to some of her own insecurities when she is around her boyfriend's friends, a group who grew up with trust funds and private schools. But Claire holds her own. In Heart-Shaped Box, I sent Claire to that place guaranteed to trigger insecurity in most people: the 20th high school reunion.

Like many writers, I use a lot of my own "back story" for my main character's past. Claire and I have had some of the same jobs, although I've never been a vanity license plate verifier like Claire. Claire grew up in hand-me-downs, same as I did. Like Claire, I know what its like to grow up poor, although Claire's life lacked the certainty that mine always had. I had two loving parents. Claire was born to a scatterbrained unwed 16-year-old. Even as a child, Claire was often more mature than her mother. I knew we would always have food on the table for dinner, and Claire didn't even have that certainty. Still, as a child I knew there wasn't money for things, and decided it was better not to ask. At the beginning of each school year, we each got one pair of shoes from Kinneys. But cheap shoes aren't made to be worn day in and day out. I used to take the little orange cardboard checkout slips from library books and (cover your eyes, librarians!) put them in my shoes to patch over the holes in the soles.

In elementary school, popularity seemed based on who could play four-square the best or throw a ball the furthest. I am so uncoordinated that my natural response to anything being thrown at me—keys, balls of all sorts—is to duck. As I got older, being popular was almost synonymous with having money—money to go on out-of-state vacations, money to buy the coolest clothes, money to pay for horse-riding lessons or ski trips. When I was a teenager, I was hyperaware of my big vocabulary, thick glasses, deep voice and skinny frame. As an adult, I feel intimidated when other people quote French or Latin, or refer knowingly to Boswell, Madame Bovary and Nabakov. I worked my way through college, and spent more time trying to figure out how I could get more sleep than I did on learning the classics.

Now I'm successful. I've got a college degree. I make more money than my hard-working parents ever did. On the inside, though, there are days when I still feel uneducated, uncoordinated, unsophisticated. Writing about Claire gives me permission to explore those feelings—and even resolve them. Writing about Claire gives me a way to explore these feelings and even have fun with them. In September, I flew to California. After the plane landed, everyone crowded into the aisle. As I pushed my armed through the sleeve of my coat, I accidentally groped a man standing in the aisle. I apologized. He blushed. And as I walked down the ramp, I was already planning on having the same thing happen to Claire, and I was able to laugh at myself. Writers steal from themselves and call it fiction.

I'm never going to be sophisticated. Like Claire, I'll probably always spill things on my clothes, have hair that refuses to behave, and never get around to reading Sartre. So what? The older I get, the more I realize that everyone is trying to fit in. At some point, everyone feels alone and outcast.

I recently read about something called the 20-40-60 rule. When you're twenty, you know that everyone is looking at you and judging you. When you're forty, you decide you don't care. And when you're sixty, you realize they were never really looking at you in the first place.