A Matter of Trust  (1st in the Mia Quinn Series) 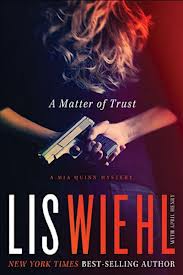 About the book
It all starts with a phone call from the dead.

Mia Quinn is on the phone with Colleen, her best friend and coworker, when the unthinkable happens: she hears the sound of a gunshot. And Colleen's death is an eerie echo of the murder of another Seattle prosecutor who was also gunned down at home four years earlier.

Mia’s life has already been turned upside down by the recent death of her husband. Now a single parent to a teenager and a toddler, she is struggling to hold on to their house. Meanwhile, her son has turned moody and secretive, and her daughter is suffering from mysterious nightmares.

When the DA asks her to head up the investigation into Colleen’s death and its connections to the earlier murder, Mia agrees—if he’ll also let her investigate the suicide of a teenager who may have been bullied to death. Partnered with irascible homicide detective Charlie Carlson, Mia finds that many people could have wanted Colleen dead, including people in Mia's life she thought she could trust.

As Mia races to figure out who gunned down Colleen in cold blood, she uncovers more secrets than she bargained for. Has she been wrong to trust those closest to her?

Will she put the pieces together before it’s too late? A Matter of Trust is a riveting tale of love, loyalty—and murder.

Reviews
"This suspenseful first in a new series from Wiehl and Henry (Eyes of Justice and three other Triple Threat novels) opens with a bang. While Mia Quinn, a prosecutor in the King County (Wash.) district attorney's office, is on the phone with a fellow prosecutor, Colleen Miller, someone shoots Colleen dead. Mia's boss, DA Frank D'Amato, asks her to lead the investigation into Colleen's death, which could have a link to the murder of another prosecutor four years earlier. Meanwhile Mia is also working the case of a bullied teenager who committed suicide, and trying to raise her teenage son and preschool daughter, as well as coping with her husband's death. Trust becomes the centerpiece--who deserves it and the betrayal that trust sometimes leads to--in a story full of twists and turns that also offers a hint of future romance for Mia."
- Publishers Weekly

"An exciting new series with prosecutor Mia at the center. The mystery is engaging and not easy to figure out. The side storyline about bullying is timely and will hit close to home for many."
- Four stars, Romantic Times

"A Matter of Trust is a thoroughly satisfying mystery, well paced and tightly written. Mia and Charlie are intriguing characters, and readers can hope they’ll return in future novels."- CBA Retailers + Resources

For the audio book:"Wiehl and Henry get their new series off to a breathless start: on a cellphone, recently widowed prosecutor Mia Quinn, protagonist of the series, overhears her friend and colleague Colleen Miller being shot. Narrator Eleni Pappageorge channels Quinn’s intensity, but uses skillful pacing and tone rather than frantic vocals to convey the novel’s swiftly unfolding events. The authors have created an appealing lead in the still-grieving Mia, who is a bit overwhelmed by the responsibilities of single parenthood and leading an investigation into her friend’s murder. Equally appealing is Quinn’s partner, homicide detective Charlie Carlson, whose unconventional methods Quinn doesn’t trust. Pappageorge crisply presents the twists and turns of plot, while using subtle touches to suggest the characters’ moods."
- Publishers Weekly

"Wiehl and Henry introduce their new series featuring Mia Quinn, a recently widowed federal prosecutor in Seattle. The first-person story includes cutting-edge investigative techniques of murder and of online bullying that has led to a teen suicide. Narrator Eleni Pappageorge captures Mia's struggles with grief, single parenting, and the discovery of her husband's secret financial devastation. The antagonism between Mia and Charlie, the homicide detective assigned to the investigation, is delivered with a subtle humor and sensitivity that suggests a potential romance later in the series. Pappageorge's depiction of Gabe, Mia's teenage son, who is torn between the confusion of grief and wanting to belong, is insightful and true to life. Her versatile range and vocal skills perfectly render a gripping suspense with a completely unexpected ending."
- Audiofile Magazine