Circles of Confusion (1st in the Claire Montrose Series) 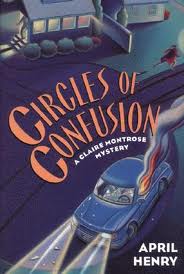 About the book
With the exception of having the power to reject salacious requests for vanity license plates, Claire Montrose leads a monotonous life. Then she inherits the possessions of her great aunt and finds a beautiful painting hidden for decades in an old suitcase. Claire takes it to New York, but an expert deems it a forgery. But is it really? Unable to trust anyone, Claire tries to stay alive long enough to find out the truth about the coveted piece of art and her pursuers.


Reviews
Circles of Confusion—an artistic term—is a wonderful book! ... Henry humorously ends most passages with vanity license plate phrases, and in keeping with that vein, I have to say Circles of Confusion was GR8!"
- Mystery News

"In her first novel, April Henry has created a cracker-jack plot that is intelligent, internally consistent and interesting."
- The Drood Review

"April Henry, a 39-year-old Portland resident who works in corporate communications, is attracting attention as a new writer to watch with this fast-paced debut mystery."
- Eugene Register-Guard

"A first time mystery novelist seldom strides onstage with more assuredness than April Henry. ... Circles of Confusion is a galloping-fast read—smoothly written and bright with wit, but also tinged with somber reflections. There are good characters, a sense of consequences and a competence with shifting mood that's unusually skillful for a first novel. Henry's powers of description are formidable."
- The Oregonian

"The most fun of all are the chapter endings, each one featuring a vanity license plate that needs to be deciphered....Want more? BYDBK
-  The Denver Post

"Circles of Confusion is tremendous fun. It's the most adventurous, humorous and romantic novel since Dame Agatha gave us The Man in the Brown Suit. You'll be spellbound by Claire's adventures and will also find yourself envying her romantic interludes. The superb ending will have you shaking your head and smiling at the same time. Brava, Ms. Henry, and thank you for some highly diverting entertainment."
- Romantic Times Magazine

"Henry seems like anything but a beginner. Her writing is assured and deft, the mystery well stated, the characters just real enough to capture the reader's attention without resorting to eccentricity."
- Salem Statesman Journal