Hand of Fate (2nd in the Triple Threat Series) 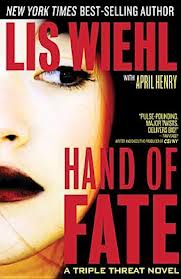 When the host of a popular radio talk show is murdered, the suspects almost outnumber his millions of listeners.

Outspoken radio talk show host Jim Fate dies tragically when poisonous gas fills the studio while his polarizing show, "The Hand of Fate", is on air.

In the ensuing panic, police evacuate downtown Portland — and the triple threat of FBI Special Agent Nicole Hedges, crime reporter Cassidy Shaw, and Federal Prosecutor Allison Pierce begin piecing together the madness, motive, and mystery of what just happened. And this time, it's personal since one of the women was secretly dating the host and has access to his home…and possible evidence.

In the days following Fate's murder, these three colleagues and friends confront a betrayal of the team while unearthing the not-so-public life of Jim Fate. Together, they must uncover the stunning truth of who killed him, how close the killer really is, and the twisted motive for this cold-blooded murder.

Reviews
"Excellent ... Readers will identify with these very real women as they try to uncover Fate's killer."
- Publishers Weekly

"Strong female characters and steady pacing combined with a suspenseful story line will win Wiehl [and Henry] new readers. This is sure to be enjoyed by fans of J.D. Robb."
- Library Journal

"The second book by Wiehl and Henry featuring the Triple Threat Club ratchets up the excitement and suspense to another level. Realistic characters with authentic dilemmas will appeal to a wide array of mystery lovers."
- Romantic Times, Four Stars

"In an exciting and much anticipated return, Wiehl and Henry once again captivate readers with the continuation of The Triple Threat Club in the "Hand of Fate". Instantly riveting. ... Wiehl and Henry clearly demonstrate their remarkable talent--as authors and collaborators--by creating heart-wrenching circumstances where readers cannot help but empathize, forming an unexpected bond with each character. Those who have waited patiently for this release will not be disappointed."
- Suspense Magazine

"This second 'Triple Threat' novel brings the three interesting female characters back together to solve the murder and determine the motive. The three women affirm the importance of justice, but also learn that the trust of friends should not be assumed or betrayed."
- CBA Retailers + Resources magazine

The inspiration behind Hand of Fate
Since Lis spent eight years working side by side with Bill O'Reilly on The Radio Factor, the publisher suggested we begin a book by murdering a talk show host. Bill even weighed in on how he wanted the guy to die. But the radio host is not based on any one person. In fact, we sprinkled in clues pointing to nearly a dozen real life talk show radio hosts. See if you can spot them all.