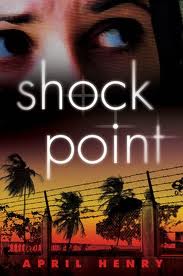 About the book
Cassie Streng, 16, learns that her psychiatrist stepfather, Rick, prescribed an experimental drug for his teenage patients, three of whom have committed suicide. Before she can report him, she is grabbed by two men, handcuffed, locked in the back of a van, and taken to Peaceful Cove, a facility for troubled teens in Mexico. Rick has assured her mother that the place is an excellent boarding school–he maintains that he found crystal meth in Cassie's room–but she soon discovers the truth. She is trapped in a brutal prison camp, and she must make her way back to Oregon and convince someone of the danger Rick represents before anyone else dies.

Reviews
"Many of the scenes are disturbing, but Cassie is a fearless and resourceful heroine, who will surely have teen readers rooting for her to come out ahead and foil the plots of one of the most villainous stepfathers since Mr. Murdstone sent little David Copperfield to the bottling factory."
- Mystery Scene Magazine

"Popular adult mystery author, April Henry, ventures into the YA genre with the publication of her latest novel... Fast-paced and suspenseful, this is a good book for reluctant readers."
- Cedar Rapids Gazette

"April Henry's suspenseful novel is fraught with tension from page one."
- Bulletin for the Center for Children's Literature

"Short chapters that show how she uncovers her stepfather's actions alternate with the story of her journey from Portland to Mexico, a nicely executed technique that keeps the plot moving and readers engaged. ... Henry packs her first YA novel with the quick action and suspense that will keep even reluctant readers turning the pages."
- School Library Journal

"Shock Point is a riveting tale of survival and determination, chockfull of suspense and urgency. Fair warning: once you start reading, you will find it nearly impossible to close the book until the very end."
- teenreads.com

"Henry's first YA thriller is a suspenseful tale of betrayal.... The alternating chapters help to build suspense. The meat of the story is Cassie's attempt to escape. She is an appealing, resourceful character struggling against too many odds—and readers will stick with this tale to see if she succeeds."
- Publishers Weekly

"The wicked stepmother motif is altered to wicked stepfather in this contemporary chiller. ... Along with solid plotting and suspense comes a likable heroine who is a good match for the nefarious adults in her life."
- Booklist

The inspiration behind Shock Point
I lot of kids want to know if there are really schools like Peaceful Cove in Shock Point. Yes. Here are links to some articles. The first is the article that inspired me to write the book.

New York Times article that started it all