Jacket design by Rich Deas, illustrations by Kendal Tuli-Esterbrook for Educurious
About the book
Sixteen-year-old Cheyenne Wilder is asleep in the back of her mom's car when it's stolen from the pharmacy parking lot. Cheyenne is not only sick with pneumonia—she's also blind. Griffin, the teenager who was stealing packages out of parked cars, hadn't meant to kidnap her; he just impulsively stole the car with her in it. But once Griffin's dad finds out that Cheyenne's father is the president of Nike, everything changes—now there's a reason to keep her. Will Cheyenne be able to survive this harrowing ordeal and escape? And if so, at what price?

News
"If you liked Girl, Stolen, you’ll love Henry’s latest tale of abduction, escape, and paranoia." - Click to see the review on Booklist.

Check out this story in Publishers Weekly about how April found the real stolen girl.

April's essay about tracking down the real stolen girl.

Some of the covers that were considered for Girl, Stolen.

The story behind Girl, Stolen

Reviews
"This novel is a worthy public and school library purchase featuring a brave visually-disabled female and a kindly, courteous male hero. It is not only a page-turning suspense, but this roller coaster read also reminds the teen reader that every action causes a reaction. Moreover, the author proves that brain power and kindness can triumph over brawn and brutality."
- Starred review (5Q), VOYA

"The pace is impeccable, becoming rapidly more frantic as Cheyenne realizes her chances for success are dwindling. In addition, the premise itself is powerfully realistic and compelling, with one small incident (Griffin's jumping into a car that had the keys in the ignition) snowballing into a nightmare series of events that will change everyone. Readers will likely recognize such pivotal - but hopefully far less dramatic - moments in their own lives."
- Bulletin for the Center for Children's Books

"A captivating tale that shifts between Cheyenne's and Griffin's thoughts. Both are well-built, complex characters, trapped in their own ways by life's circumstances, which--paired with a relentlessly fast pace--ensures a tense read."
- Publisher's Weekly

"The novel is a nail-biter with an unforgettable protagonist who smartly and bravely turns her weakness, and her captors' underestimation of her capabilities, into an advantage. Henry illuminates the teen's predicament using all of her intact senses, making every touch, sniff, and breath palpable. Cheyenne's growing sympathy for Griffin, who becomes her protector, adds layers of complexity to this thriller, especially when she faces leaving him injured in the woods or slowing her own escape by saving him. Readers will be hard-pressed to put this one down before its heart-pounding conclusion."
- School Library Journal

"In April Henry's suspenseful and well-researched Girl, Stolen, 16-year-old Cheyenne Wilder, resting in the backseat while her stepmother runs into the pharmacy to pick up her prescription, is not only suffering from pneumonia, but has been blind for the last three years. Is escape even possible for her? The spine-tingling chapters alternate between the teens' perspectives as Griffin delivers both the vehicle and the girl to his cruel father, Roy. Reminiscent of Gail Giles' thrillers and tension-filled to the last sentence, Girl, Stolen will resonate with readers long after the cover is closed. With a thoughtful and eye-opening look at disabilities, it highlights Cheyenne and Griffin's resourcefulness and resiliency as they save themselves - and possibly each other."
- Bookpage

"This story will appeal to all who enjoy a real thriller. Full of excitement and suspense, twists and turns, it keeps you guessing to the very end."
- Carousel: The Guide to Children's Books (United Kingdom)

"Be ready to be startled and inspired as the story reaches its climax. Readers will race to the end."
- Suspense magazine

"A survival story with a unique twist that offers readers "the page turning suspense of a kidnapping story, all the while imagining what it would be like to be held captive when you can't see. ... "The sympathetic bond that forms between Griffin and Cheyenne adds a layer of moral and emotional complexity."
- Read Write Think, a collaboration between the International Readers Association and the National Council of Teachers of English

"The book successfully stays what it intends to be -- a page-turner, and Henry isn't afraid to realistically threaten her characters, kill them off and even gray-scale their personalities and actions. But more importantly, the reader is present at that perfect moment when a boy chooses completely opposite of his father even though he knows that will mean the end of life as he understands it.
- The Oregonian

"This constant one-upping of the threat level is what gives Henry's thriller its hurtling, downhill velocity.... Henry is particularly deft at portraying the vacillating level of trust between the two, and her research on living with blindness pays dividends in authenticity. ... thoroughly exciting.
- Booklist

"This can't-put-it-down crime thriller unfolds through the viewpoints of both victim and criminal.... Although Cheyenne 's multiple problems might feel overdone in less skilled hands, Henry handles them deftly and makes her choices work. Constantly interesting and suspenseful."
- Kirkus

"This is a great page turner for teens. Learning to deal with adversity is a theme that runs through the story and readers will be talking about the choices the characters make and the consequences involved."
- Children's Literature

"Cheyenne's character is an unforgettable one, not only because of her blindness, but because of her incredible resourcefulness. The book is an engaging and revealing suspense story. Henry shares with readers a world of which most of us are completely unaware - that of the blind."
- ALAN [Assembly on Literature for Adolescents]

"The jacket art for this fast-paced teen novel is compelling and will draw readers into a story about a girl who takes control of her destiny in spite of illness, disability, and fear. Filled with tension, drama, and spirit, Cheyenne's character stands out for her abilities instead of her disability and Henry does a great job helping the reader get inside the head of a blind girl who is clearly going to survive against the odds."
- Parentwise Austin

"April Henry's Girl Stolen is page-turning suspense with a clever heroine who meets up with bad luck, bad men, a bad dog, bad weather, bad health, and has to face them without seeing them. A nail biter."
- Gail Giles, best-selling author of Whatever Happened to Cass McBride

"A unique and clever premise. Cheyenne has to be one of the most resourceful heroines in recent memory."
- Todd Strasser, the best-selling author of Wish You Were Dead
The inspiration for Girl, Stolen
My fiction always has a healthy percentage of facts. Girl, Stolen began with a story I saw in the local news. A blind girl went out to dinner with her mom and stepdad. Afterward, her folks wanted to go Christmas shopping, but she decided to wait in the car and listen to her music. Her mom left the keys in the ignition in case she got cold. A man came along, saw the keys, jumped into the car, drove off - and didn't realize there was a girl in the back seat. After he figured out she was there, he forced her out of the car. She was unharmed.

But I thought, "What if he had kept her? And what if the thief was a teenager too? And what if his dad was running a chop shop for stolen cars? And what if they thought about letting her go - until they learned she was the daughter of Nike's president?"

To research the book, I bought a blind cane and learned how to use it. I read a lot of autobiographies written by people who had gone blind. Through them, I learned how important guide dogs are to many blind people, so I spent a day at Guide Dogs for the Blind in Boring, Oregon. They even put a blindfold on me and brought out a dog for me to harness and walk. It's very hard to do that if you have never seen the dog or the harness, but I finally managed. Then I tried to pat the dog on the head - and realized I had harnessed the tail end.

I also corresponded with a high school girl who was blind and going to a regular school. And I sent the whole book to a blind woman who has a radio program about books and who has strong feelings about how blind people are portrayed in the media. She had her computer read it to her and caught some typos. So Girl, Stolen was actually proofread by a blind person!

There's a twist at the end of Girl, Stolen that a 9-1-1 supervisor helped me come up with - but I can't give it away.

April and the Real Stolen Girl meet on KATU's AM Northwest 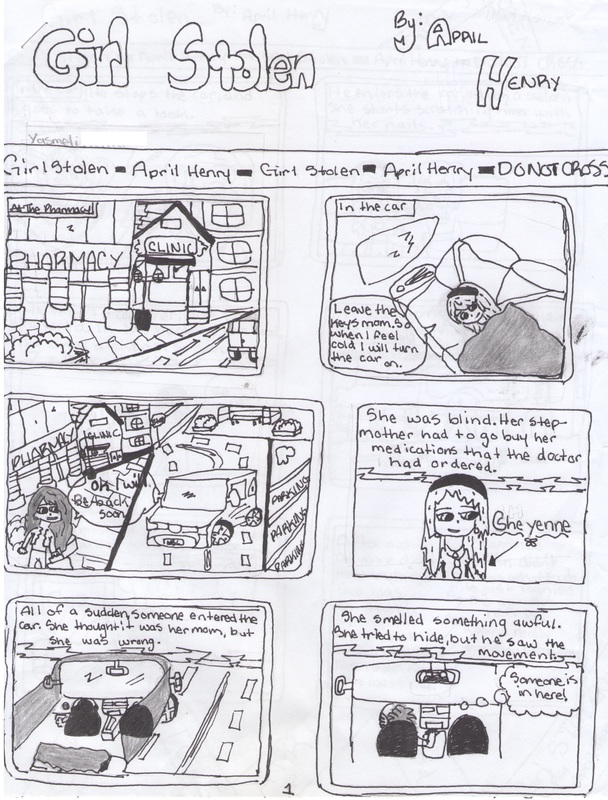 ​Yasmeli P., a seventh grader, created a graphic novel version of the opening scene of Girl Stolen! (If you do a report or display or some fan art, share it with me!)

the Darkness that surrounds me is
not what foils my faith
no
it is not the darkness but the People
the ones who deem me weak and
refuse to see my strength,
they have created this reversed facade
compelling those who have bound my hands to see my Flaws

but to surrender to Myself…
that would be their Ultimate defeat.
one i will never give them the pleasure of having, for

than
Live cowering at the feet of monsters. 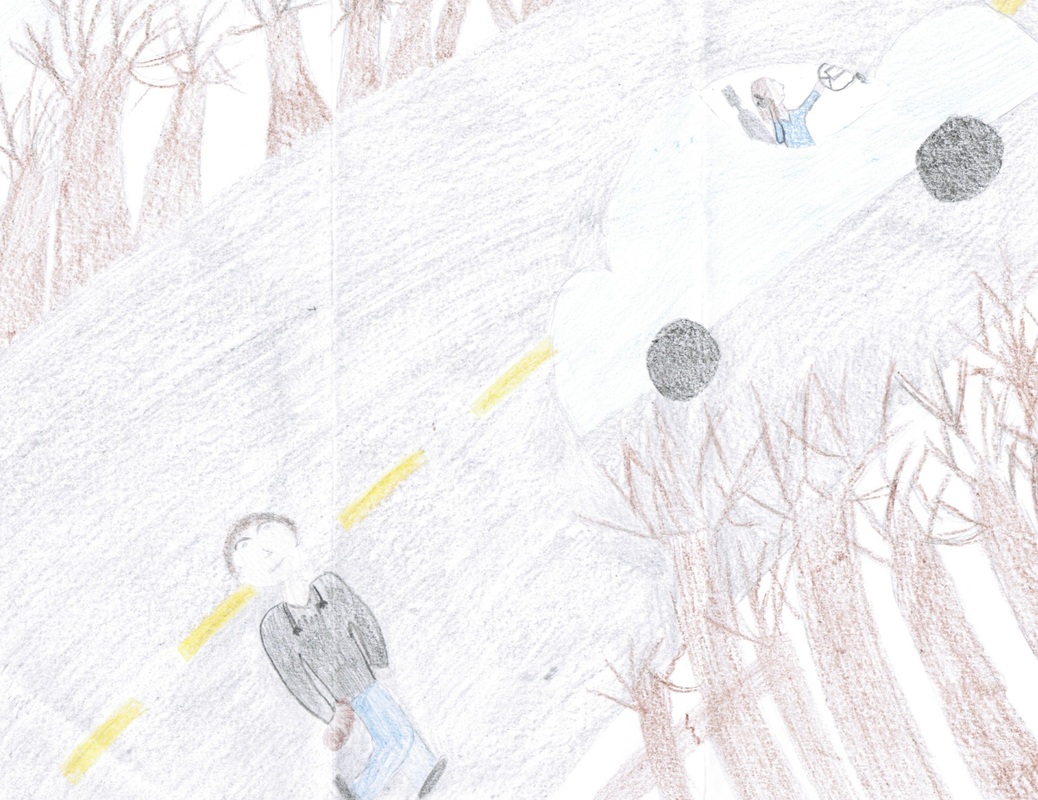 Fan art of the final scene of Girl, Stolen created by Allison Suchor of Milford, IL.