Count All Her Bones 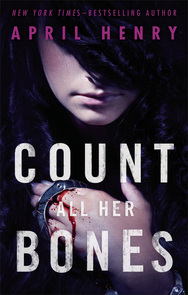 About the book
Six months ago, Griffin Sawyer meant to steal a car, but he never meant to steal the girl asleep on the back seat.  Panicked, he took her home. His father Roy decided to hold Cheyenne—who is blind—for ransom. Griffin helped her escape, and now Roy is awaiting trial. As they prepare to testify, Griffin and Cheyenne reconnect and make plans to meet. But the plan goes horribly wrong—Cheyenne gets captured by Roy’s henchmen; this time for the kill. Can Cheyenne use her new martial arts skills to free herself? And is Griffin a pawn or a player in this deadly chase?

Reviews
"In this sequel to Girl, Stolen (Macmillan, 2010/VOYA August 2010), Cheyenne is still something of a prisoner. Six months earlier, she was kidnapped for ransom, and now she awaits her day in court to convince the jury that she can identify exactly who her kidnapper was, despite her inability to identify him by sight (she is blind). For six months, her life has been in personal lockdown, with a twenty-four-hour bodyguard and activities restricted to home and school; this means that, for six months, she has not spoken to Griffin. Then, he begins to secretly message her on Facebook. Despite his accidental hand in her kidnapping, Cheyenne knows that he is a good guy. When she agrees to sneak out to meet him, however, she is again taken captive by Griffin’s family, and this time, they are not promising her safe release.  Cheyenne finds herself once again in the fight of her life—only this time, she is not sure if the boy she loves is fighting to save (or end) her life.

Count All Her Bones is a thrill ride, as fast-paced and exciting as the first installment.  Refreshingly, this is not a text where the protagonist’s disability is the sole focus of the plot or her character. Part thriller, part romance, part adventure, the book focuses on Cheyenne’s life post-kidnapping and her extensive self-defense and martial arts training, which make for a narrative of advocacy and self-empowerment. Readers will likely find Cheyenne a fierce, female protagonist to root for, and the text’s surprising turns will keep them hooked."
–VOYA

"The story of Cheyenne and Griffin continues in this sequel to Girl, Stolen (2010).Six months after her kidnapping, Cheyenne Wilder is preparing for the trial of Roy Sawyer, the man who held her for ransom, dealing with her overprotective parents, and learning self-defense techniques from her new bodyguard. Cheyenne can't—and won't—let being blind stop her from becoming stronger. Yet when it comes to Griffin Sawyer, the boy who accidentally kidnapped her but helped her escape, Cheyenne doesn't feel strong. Griffin is going to testify against his father, Roy, which causes Roy and his half brother, Dwayne, to begin plotting. ... . In a pulse-pounding sequence, Cheyenne must find a way to use what she has learned to save herself and Griffin—but when Dwayne threatens more than just the two of them, how can two teenagers, one of them blind, defeat a fully grown man? Providing plenty of background for anyone who did not read the first book.... Cheyenne's blindness makes her an out-of-the-ordinary thriller star, particularly when emotions like confusion and self-doubt are shown, helping readers get under her skin.... Readers will be rooting for Cheyenne and Griffin from the edges of their seats.
​—Kirkus

"This novel picks up a few months after Girl, Stolen left off. Having survived her kidnapping, Cheyenne is back at home, trying to reestablish her life but chafing under the increased security put in place by her father and stepmother. She hasn’t spoken to Griffin, her erstwhile, accidental kidnapper and love interest, but can’t seem to get him out of her head, and not just because she’s preparing to testify against his father, Roy, in his upcoming trial. Griffin is planning on testifying, too, and inevitably the two are thrown back together as Roy plots to keep both of them out of the courtroom. This book offers the same suspense and tightly paced action as its predecessor.... VERDICT Although written as a sequel, this volume stands on its own and should be considered for any YA collection looking for contemporary suspense titles."
—School Library Journal

"As with the previous installment, the real strength is how Cheyenne navigates her world, and the extra layer of difficulty her blindness presents. An exciting and satisfying conclusion to Cheyenne and Griffin’s story."
​—Booklist

The story behind the cover for Count All Her Bones

April Ward, an art director at Macmillan, decided that the handcuffs would make an interesting image. Toward the end of the book, Cheyenne begins to turn the tables, using the handcuffs that were originally restraining her as a weapon. 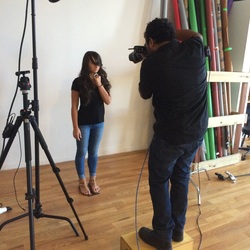 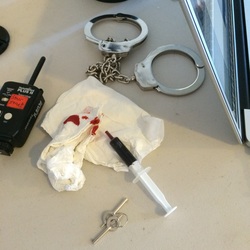 Photographer Jon Barkat actually bought a huge container of fake blood for the shoot. But he and April Ward decided not to put it directly on the model’s skin after reading the bottle. Evidently it stains! So now he has a lot of leftover blood. 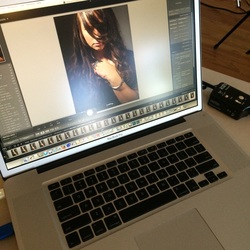 ​Instead of risking staining the model’s skin, the blood was added on the computer.