EYES OF JUSTICE (4TH IN THE TRIPLE THREAT SERIES) 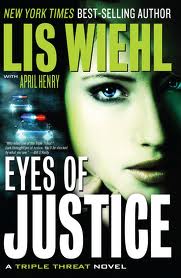 About the book
Cassidy, Allison, and Nicole fight for justice every day-Cassidy as a crime reporter, Nicole with the FBI, and Allison as a federal prosecutor. Together they're a Triple Threat to be reckoned with.

But never have they faced a case so full of blind alleys-or so painfully close to home.

When a devastating turn of events upsets the balance of the Triple Threat team, they discover an ally in a quirky Private Investigator named Olivia. The women vow not to stop until the case is solved and justice is served.

Yet just when it appears the police have the killer in custody, he somehow strikes again. Not knowing whom to trust, the Triple Threat women go undercover for an intricate and deadly cat-and-mouse game where nothing can be taken at face value … and nothing will ever be the same.

"The surviving members of the Triple Threat investigate the shocking murder of one of their own....Fans may be dismayed at the demise of a key player, but the fast-paced writing and appealing characters go a long way to making amends."
- Kirkus

"Wiehl and Henry revisit the Triple Threat club in their fourth novel featuring the three crime-fighting women - and dare to turn the entire series upside down with the events that occur. Yet, somehow, this works well and causes the reader to become more invested in discovering the culprit of the horrendous crimes."
- Romantic Times

"This fourth 'Triple Threat' novel shakes up the dynamics of the series and the rapport shared by the main characters in the first three books. Fans of the series will wonder who will survive this intense mystery as the women learn that life shouldn't be taken for granted and sacrifice may be required for justice to prevail."
- CBA Retailers and Resources